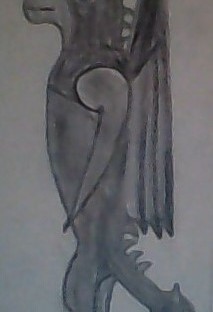 The Armorph have the unique ability to transform parts of their bodies into weapons. They were developed by experiments that Jiqeeran and Chenfa dragons performed together. They took one of the Chenfa and tried to see if it could mimic other objects other than itself. While attempting and not really succeeding, one of the guns being used was fired off by accident and hit the machine they were using. A blast of purple energy shot out and morphed the weapons into several of the Chenfa dragons. Their appearances changed from their single colored skin like scales to purple bat-like skin. Their arms had morphed into swords without them thinking about it. The wings on their back grew twice in length and had sharp metallic edges to each bat-like wing. Down their back formed curved spines like claws that went down to their now elongated tail which had a mace head at the end of it. They found out that they could morph their bodies into weapons and went to go show their clan in the land of Yin Ben. The Chenfa were horrified by the weaponized creatures that came home to them. Not knowing what these dragons would do, they banished them from their land. The new weaponized creatures left saddened and angered to the land of Contritus. There they found comrades with the goblins who welcomed them with open arms. Ever since that day, they have called themselves Armorph and have stayed loyal friends to the goblin race. Their home lies in a series of caves made by the Gremlins underneath Bello Cap. They are always at the call for the goblins and will protect their allies at any cost.

An epic storyteller eager to share his tales with others. I am married to the love of my life, and live in New Hampshire. In my scholastic career, I have a associates' degree in teaching and currently working at a gas station, though I hope that is about to change. My dream is to become a published writer and share my stories with others. View all posts by KC J. Hutchins