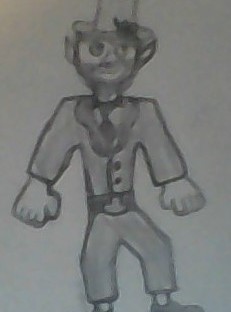 A trickster by nature, this creature relies on magic to defend itself though that may not be the right word. Leprechauns are usually total cowards, only getting physical during a bar brawl with their kin. As much as they avoid fighting, it does not mean they recoil from conflict. Most of these creatures gain their vast wealth by tricking other creatures out of their money. Their magic revolves around teleportation, shape shifting, and misdirection; allowing for the leprechaun to prevent their capture. If this unfortunate event occurs, they are either required to give up their pot of gold or grant one wish. This is considered the most embarrassing of circumstances that can happen to one of their own. When not swindling people from their money, they have a talented and honest gift of shoe making. To wear a shoe made by these creatures is to wear a soft blanket that hugs the soles. Don’t let the outside fool your for their craftsmanship shall last a lifetime and never be scuffed. To acquire such fine work, one must find their hidden village found on the island of Eire. It is said that no other creature other than the leprechaun has seen this village.

A leprechaun’s attire consists of a green overcoat with long coat tails with matching slacks while they only stand three feet tall. A white shirt is worn underneath with a similar green west with gold trimmings in the design of usually a shamrock. If one of them wants to show off their wealth, they will even wear a vest of complete gold. In appearance, they have red hair with some freckles that decorate their skin. A beard decorates the face of most males on this species. Upon their head can rest three different types of hats; a top hat, bowler hat, or paddy cap each with decorations of clovers. Speaking of which, when one of these creatures dies, the place at which their body lies becomes a bed of shamrocks. A peaceful end for this creature of mischief, but an appropriate one.

An epic storyteller eager to share his tales with others. I am 25 years old, engaged to my beautiful wife-to-be, and live in New Hampshire. In my scholastic career, I have a associates' degree in teaching and currently working at a gas station, though I hope that is about to change. My dream is to become a published writer and share my stories with others. View all posts by KC J. Hutchins