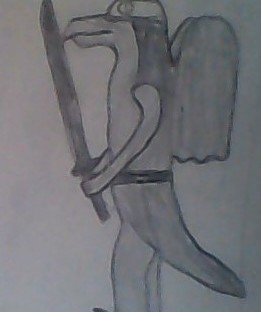 Eerie how shadows can seem to crawl toward one and follow one’s every move; never leaving their side. Constantly, they watch as those in the light walk about ever so freely. Caution is advised if you find one acting strangely, one of two beings you could have on your hand. This time around we will talk about the option of it being the dragon species known as the Yilong. These creatures have the ability to make shadows move at their will; sometimes forming solid constructs or simply melting into the darkness. They are extremely crafty, able to plan several steps ahead of time while favoring surprise attacks. Usually, these dragons are hired for assassinations by other lands; rarely getting into larger conflicts except for warring with their human ninja neighbors in the land of Ying. The reason being not of land division, but a rivalry of gaining contracts for assassination targets.

In appearance, these dragons unlike others have a beak-like mouth and are smaller in size. This proving an advantage as it helps them to move about quicker and with more acrobatic ability. Their smaller wings are more meant for gliding from roof top to roof top than anything else; depending on their quick feet or hitching a ride in a stranger’s shadow. Found along their body are thin black scales that help camouflage them into the darkness except for a band-like gray pattern found around the eyes to the back of the head. Down their spine you will find no spikes, only a smooth back to their short tail that they use to heighten their jumps. Their eyes adjust to light from having them be completely black to a sliver with green outside the pupil. Never try to face these creatures without a plan of action. Odds are they have already put theirs into effect before you take your first step.

An epic storyteller eager to share his tales with others. Not really much to tell really. I'm the author of the self published book Scars and Scales. Other than that I have an amazing wife... yeah View all posts by KC J. Hutchins