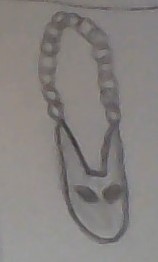 A small golden medallion of a cat’s face with elongated ears, its eyes glows green when it uses its powers. This object allows the wearer to control anyone who looks at it directly, among some other abilities still yet to be discovered. It was recovered after the fall of the Pharaoh Tandaa and given to the Racconto to store. The mad man attempted to control all Hadithi following the Wizard’s War. He was stopped by an alliance formed between the genies, the people of the region of Uchawi, and some rogue sorcerers from Mendaxum. They decided it was best to leave the former rulers body with his people in the region of Kunyoosha, but the medallion they needed to be sent as far away as possible.

An epic storyteller eager to share his tales with others. I am married to the love of my life, and live in New Hampshire. In my scholastic career, I have a associates' degree in teaching and currently working at a grocery store, though I hope that is about to change. My dream is to become a published writer and share my stories with others. View all posts by KC J. Hutchins