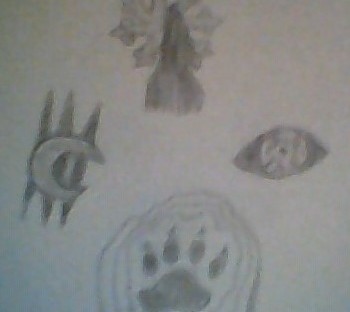 At the beginning, when werewolves first came into existence, there was only one tribe led by the Matriarch. She was the mother of their kind and had a mixed coat of grey, brown, white, and black. Her abilities were limitless compared to her children. She led benevolently over the one tribe for many moons before passing on. With her last breath, she imparted her wisdom upon her brethren, gifting each one of four necklaces that held a portion of her power. From there, the four tribes were born, and each tribe has held one of the treasures as their most sacred object  First is the tribe of Moon Claw with their fur of grey. They are renowned healers who can heal even the most critically wounded. Since healers are usually on the front lines of battle, they are also decent fighters. Their home is in Floresta in the forests of Baum. Another pack is the Howling Winter. As one can guess from the name, they are found in the snow-covered land of Pruina. They are masters of the silent kill and stealth, capable of blending into their surroundings with ease. Their coats are usually white in color but they can change the pigment of every strand of fur on their body. The next tribe would be the Pounce Paw tribe found in the desert land of Kasi. They are the quickest werewolves of all the tribes and are known for killing prey by sucking the very blood from the creature. One can usually tell by the three holes in the victim’s neck that it was a member of the Pounce Paw tribe. Some think that they may be a cross between vampire and werewolf due to their increased speed, nocturnal nature, and the way they kill. Anyways they have coats spotted with brown, black, and white patterns with long tails that they use to turn around corners. Most also have spines with spikes that shoot out to defend against attack. Finally, there is the clan that most despise. These are the Lunalpha tribe once found in the land of Éire before the Fang War. They are known as the most vicious clan who showed absolute no mercy in battle. Thus, another name they are known by are Lunatics. It is not too far off from the feeling of being in that beastly form from the accounts of those born into this tribe. Anger fuels how much power one of them can unleash. They have a coat of all black that strikes fear into the heart of their enemies. The reason why this tribe in particular is so hated is due in part to one individual, Mallupo. Part of the family of the chief, he used his power to quench his love of violence and mayhem. The Fang War would have ended a lot sooner if he had not killed a peace treaty group that had come to Éire to see the current leader of the Lunalpha tribe. They would never know about this fact until many moons later once the war had ended and the entirety of the Lunalpha tribe had been wiped out, or so it was thought.

There are six major energies that can be tapped into by the beings found in Magitotum. Werewolves and vampires can easily access the primal. This animalistic energy is made by every living thing that breathes. When it takes shape, you can see the pale light of the moon. It is thought that the moon can bring out the beast out of even the most civilized creature. Next would be the elemental, or Primus, these that occur in nature. This force flows through the world itself and through every living thing. Shamans use this energy mixed with their own magical network to cast spells. This brings me to a second one, magic. Much like our nervous system, those who can tap into magic have what we call a magical network. It serves as a way for their body to properly channel the power. This energy pools in three locations in a sorcerer’s body; the brain, chest, and the abdomen. Because of where these are found, the one using it has a limited amount they can perform at one time. Overtaxing themselves could lead to their very deaths. There are locations throughout Magitotum that naturally flows a wellspring of magic itself, like their home of Mendaxum which can expand their abilities in the immediate area. Metaphysical energy, or Eximus, is characterized as being beyond comprehension. It is not that it cannot be manipulated but that the energies are not fully understood. For example, over in the land of Orario are the Tempago who manipulate the very fabric of time; something they dedicate their lives to master. Not one of them have full control over the force; as is true for any of the metaphysical forces. The final two energies are less known by most of Magitotum. The first is called aura, the internal fighting spirit. Each person has a unique form of this energy that appears as a color and covers the outside of the body. The form it takes can show the abilities the individual may possess. Finally, the last one is called chakra. This form is wielded by very few and connects to the spiritual energy that flows from person to person. There are seven pools of this energy that are found within the body. If someone taps into all of them, it is rumored that they can avoid death until they are ready to accept it. Necromancers are one of the very few that can tap into this and usually end up as key keepers along with Reapers and the Phasm in the land of Peractium.